The game takes place in the fictional country of South Masian. Ruthless enemy soldiers from the North have suddenly invaded, murdering, and pillaging to their heart's content. Wendy Park, the main protagonist, fights to protect her family, free captives, and to liberate her town from the occupational forces.
Taking place in a modern setting, it's not about slaying ogres with a broadsword, but rather killing Communist invades with a sub machine. There are a slew of real world firearms in the game as well as heroines that use martial arts. Limited physic powers and clone soldiers are the only real fantasy elements.

Bond of Blood has two main gameplay modes; story mode and battle mode. In story mode the player will control Wendy as she walks around her parents' hotel, which acts as a base of sorts. She can talk and interact with many NPCs. To Include family members, friends, allied soldiers, normal townsfolk, and former enemies that has been convinced to switch sides.

Bond of Blood's battle mood is sure to leave a lasting impression on you. Start off playing as Wendy and members of her family, each with their own stats. There are no power ups. And with limited ammo, health that doesn't recover, and unique character skills, the player is greatly encouraged to swap out heroes. It's fun and in some cases necessary, if you want to overcome some obstacles.

All heroes and heroines can evade enemy fire by 'hiding' into the background. You can also use a melee attack and reload at any time. (Assuming you have any bullets left.)
Some missions has objectives you must meet before you can clear them. Others have a sandbox feel and you can come and go as you please. Additionally, some heroes are exclusive to select missions. I try to go the extra mile to keep things fresh and interesting.

On most missions there will also be captives you'll need to save. The poor soul is being tortured and it's up to you free them. But afterwards they don't just thank you and disappear; freed captives join your party! Moreover on the main quest, your party will get progressively bigger with each stage.

My wife drew the illustration you see here, however there are other artists contributing art work as well. The game also features music from two different composers. All pixel art is by done by your's truly, and I pride myself on never using stolen sprites or tile sheets.

I am confident that if you try Bond of Blood you will be hooked. Give the demo a spin and tell me what you think. If you walk away impressed please consider supporting my project. Thank you.

RE: Bond of Blood (trial) 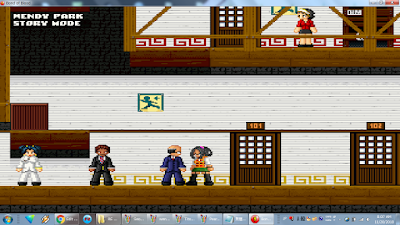 Although I feel this reboot is a great improvement, I have not yet applied it to the master game file. So if you play the reboot trial I would appreciate it if you left comments as to if you enjoy the reboot trial more, or prefer the current BoB story line.

Version 12.5 is up for Patreon supporters!

*Allowed the player to recover energy and advance to the next day by pressing the up
arrow on the bed in Angie's room.

*The scenario can be cleared! With 1 good ending and 4 bad endings. (Although the level
is complete in a sense. A bit more content will be added to it in the near future.)

[Wendy's 3rd level]
*Disabled Gwen, who is still a work in progress.

[Yong's scenario]
*If you married Ushi you can now request the cowgirl desire from her.
- November 05, 2018 No comments:

Bond of Blood build v12 is out now for Patreon supporters

Bond of Blood build v12 is now out for Patreon supporters!

And there you go. While it might not appear like much, I have been slaving away on this for well over 45 days. So please enjoy it. The other 20% of the stage will be completed in the near future.
For the next build the main (but not only) focus will be on finally allowing Yong to advance to the next game day, regardless of who we married. This will be a huge undertaking but I know everyone is looking forward to it.
If you enjoy the game and/or you think you have discovered a bug, be sure to let me know. Thank you.

p.s. There isn't a new public demo this month, but one should be out next month. Thank you.

p.p.s. Greetings. I was made aware of a few bugs so I want to put out a ver. 12.5 soon. However, this is also a good time to allow more progression on Angie's level. Or perhaps even complete it. I aim to do this within the next 48 hours. Thank you.
- October 30, 2018 No comments: